Avanafil – Getting the Best out of ED Drug Characteristics

One of the things or condition that a man would really hate to have is erectile dysfunction.  Often time, this is a condition that makes a man not feel like a man because the main reason he is called a man to begin with is not useable.  Most men who suffer from this condition tend to keep it to themselves, mainly because it is an embarrassing condition to have.  Fortunately for men who have this condition these days, they have the internet to turn to regarding their problem. END_OF_DOCUMENT_TOKEN_TO_BE_REPLACED 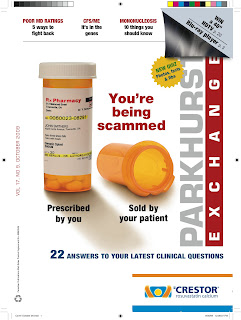 In Parkhurst Exchange magazine's cover story this month, Brampton GP Alan Russell details the growing problem of drug-scamming patients. "I still wince," writes Dr Russell, "when I think of an empty bottle bearing my name that was found outside a school two days after being filled."

Also in the issue: a Q&A with undercover cop Dave Stinson, of the Toronto Police's prescription-drug trafficking and abuse squad. Mr Stinson -- who had to interrupt the interview at one point to follow a suspect and buy some heroin -- has investigated patient-scammers as well as corrupt doctors, and he helped put away Toronto physician John Kitakufe for eight years.

"I think doctors are in a tough spot. They have confidentiality issues at the highest level. That’s the way our country, our province approaches that, and that’s a good thing -- nobody wants their health records shared with law enforcement. By the same token, as a just society, to quote Trudeau, it shouldn’t and we can’t allow it to be used as a veil to hide criminality. What I'm seeing is an increase in criminality that not only involves the public getting involved -- there is a greater demand than ever before for prescription drugs -- but also healthcare professionals unfortunately acting in a criminal way themselves."

The entire October issue is online here, save for a few pieces that you'll have to read in the print version.